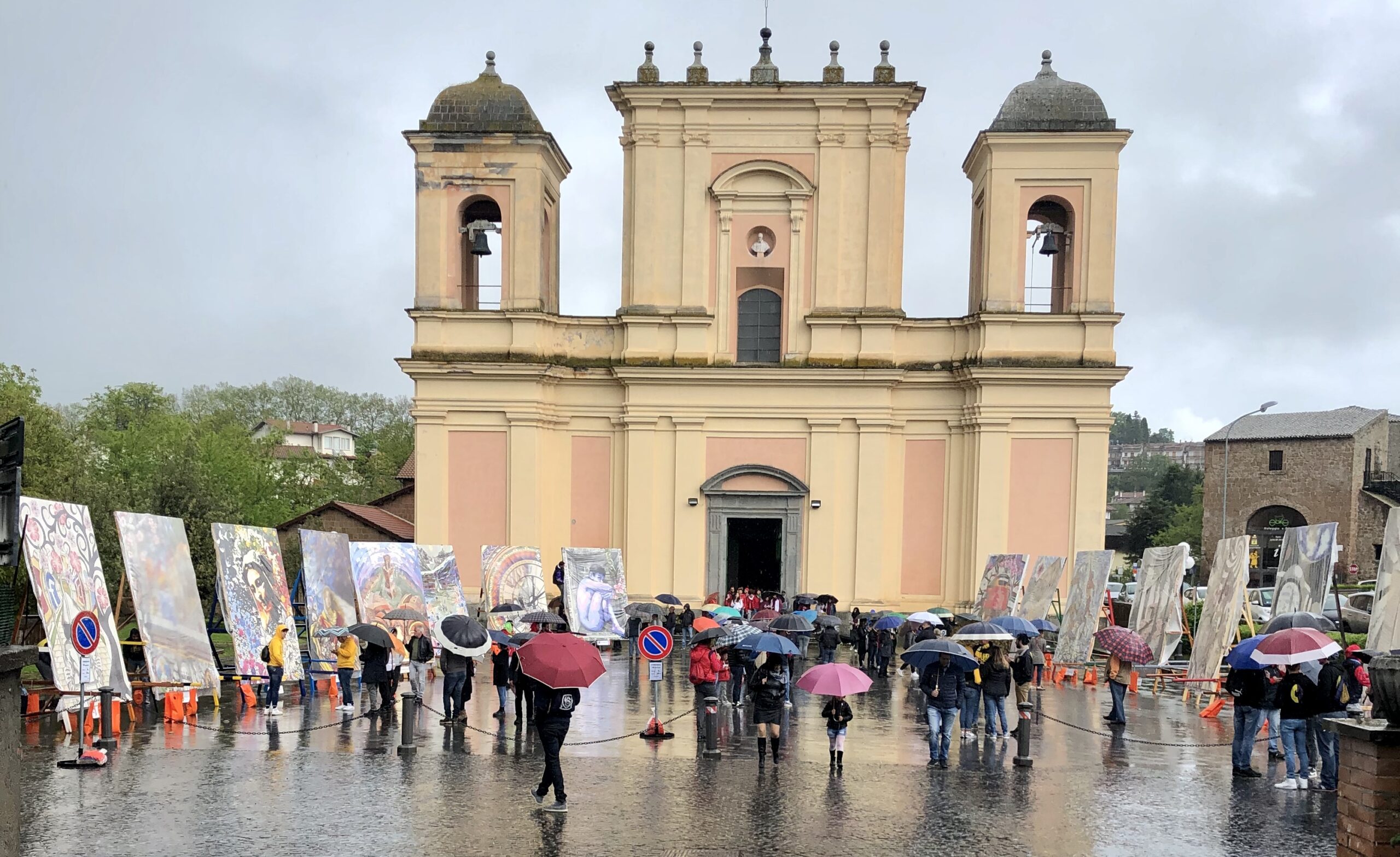 This week I would have been packing my suitcase ready to fly to Rome for the Acquapendente Pugnaloni Festival. Instead of the excitement of the real event I sit at home sharing my reflections of past festivals. So, why am I so disappointed about missing out on the Pugnaloni?

The Acquapendente Pugnaloni Festival has ancient origins. In the year 1166 AD the citizens of Acquapendente were suffering at the hands of a tyrant, Barbarossa. Then, one day, two peasants were working in the fields near a cherry-tree that refused to bloom. It so happened that this tree had come to symbolize their oppression. Suddenly, to their amazement, the tree burst into full bloom. Instilled with hope, they raced back to the town and announced the good news that the Madonna had come to their rescue!

The inhabitants of the town reacted to this news by storming Barbarossa’s Castle armed with their daggers! Hence the name Pugnaloni or stabbers! With the help of the Madonna, they defeated the tyrant and destroyed his castle. Today, the Acquapendente Pugnaloni Festival still celebrates this victory. But, it now embraces the universal theme of freedom overcoming all kinds of oppression.

Today, more than eight centuries after the event, 15 groups of young people of Acquapendente gather together to create large flower murals. Each of the groups has a name, a banner, its own colour and very enthusiastic members. The fun begins on Friday night when the group assembles with heaps of local flowers, their seeds and leaves. Each group has planned a mosaic with a social justice them. For the next 36 hours the group members party over a labour of love as their mosaic comes to life!

For the first time since the days of the war, the Pugnaloni Festival cannot take place due to COVID-19 lockdown restrictions. However, in true fighting spirit the Acquesians are not going to miss out! Pugnaloni 2020 will be a social media event! The people are preparing flower mosaics at home and submitting them on line. Voting will take place on Facebook and Pugnaloni di Acquapendente on Instagram. The winner will be announced on 17th May! So make sure you vote!

Pugnaloni 2019 almost made it – except for the weather! The rain bucketed down and the procession had to be cancelled! However, I had the privilege of being both an honorary Acquesian and an honorary member of the Porta Della Ripa group. The best part about this was that I got to see their mosaic being prepared and joined in all the partying on Friday, Saturday and Sunday nights! Here is the result of all their labour and enthusiasm.

Although it was raining the Pugnaloni were still displayed outside the Basilica of the Holy Sepulchre. As you can see in the photo they were covered in plastic. Then the procession continued through the wet streets. If you look carefully at the photo you can see the Madonna del Fiore draped in a raincoat!

The procession consisted of the Madonna and the Pugnaloni draped in plastic making their way to the Piazza Girolamo Fabrizio. Since I was a special guest I had a wonderful view of the Piazza from an upper window. We watched all the Pugnaloni arrive and enjoyed the excitement as the best six were selected and then the winner!

Pugnaloni 2018 was more of a success. The procession and flag waving ceremonies were brilliant despite a slight drizzle. The solemn procession began at the Basilica of the Holy Sepulchre. It wound its way through the ancient streets to the tune of flag throwers and drums and medieval figures. This Pugnaloni turned out to be the winner!

With a great deal of dignity and respect the Madonna del Fiore is paraded through the ancient streets. The statue is believed to be carved from the wood of the miraculous cherry tree.

I was not a special guest on this occasion and squeeezed onto a step in the crowded Piazza Girolamo Fabrizio. But I had a wonderful view of the dignitaries, medieval figures, dancing, drums and flag throwing entertainment. And then, later in the afternoon there was the excitement of returning to the Piazza for the announcement of the winner.