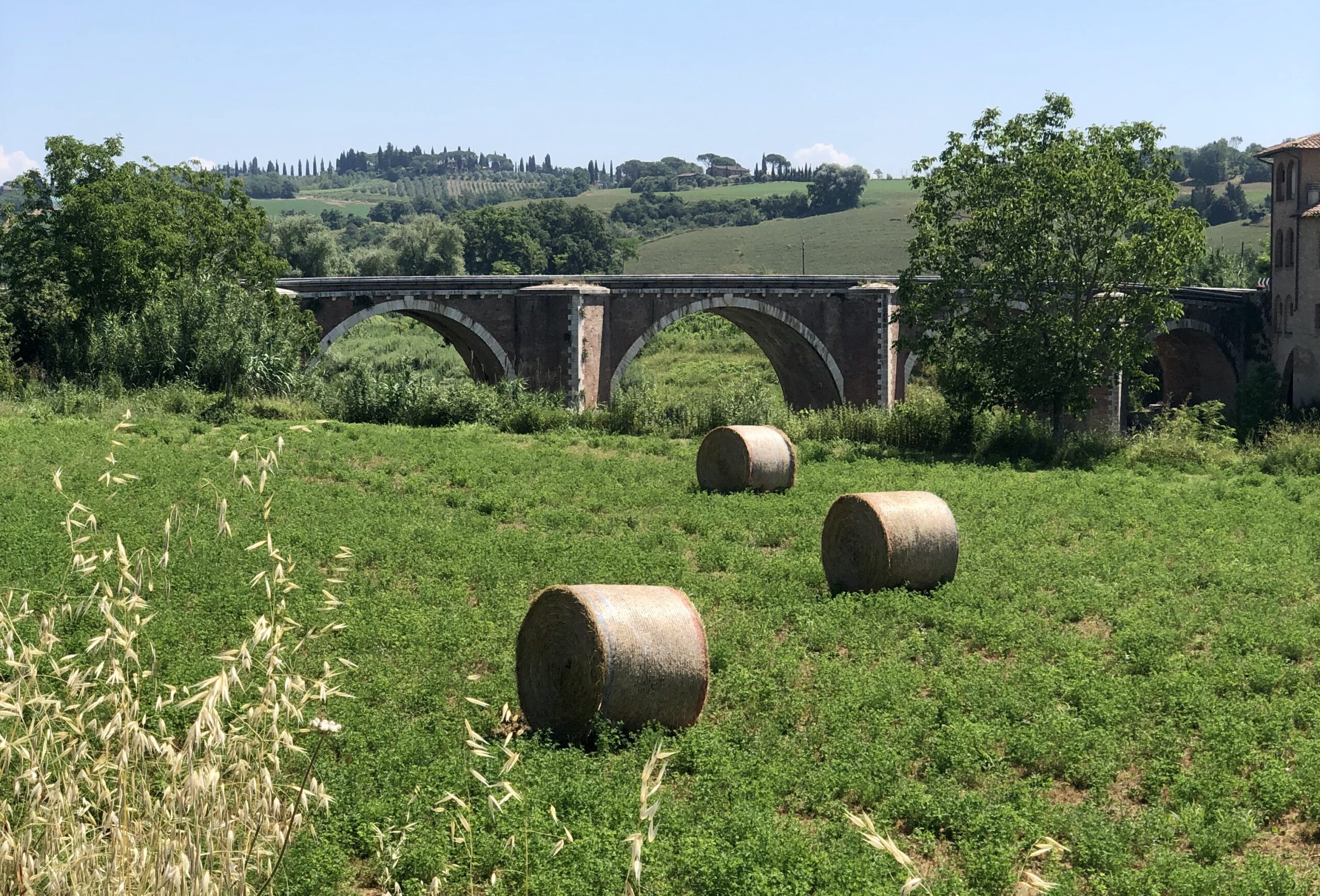 Ponte d’Arbia is Sigeric’s Stopover XIV along the Via Francigena pilgrim route. This means it was his 14th overnight stop on his way home to Canterbury in 990 AD. ‘Arbia’ was its name in Sigeric’s day. Ponte d’Arbia is located on the slopes of the Crete Senesi, the ancient desert of Accona. Water partly submerged it in in medieval times.

The Arbia River was a strategic place on the Via Francigena to Rome. ‘Borgo d’Arbia’ was its name in 1037. And and it kept this name until the end of the 1700s. It is a tributary of the Ombrone River flowing through Buonconvento. It follows the Via Cassia all the way to Isola d’Arbia and then north to Arbia and then to the vineyards north of Siena.

At Ponte d’Arbia in Sigeric’s day there must have been a bridge along the Via Francigena. This is because it is the only place where it is possible to cross the River d’arbia and continue to Buonconvento. There is evidence that several inns and taverns existed near a bridge. Also, there was a church dedicated to San Pietro which no longer exists. The oldest parish church is San Lorenzo a Sprenna near Seraville. Its ruins can be visited on the walk to Buonconvento.

The current bridge built in 1388 has certainly stood the test of time! World War II bombings destroyed the village but the bridge survived! After minor repairs in 1946 cars still use it today, but there is no passenger access. A passenger Catwalk built in 2016 gives great views of Ponte d’Arbia’s bridge, the Arbia River river and the surrounding Tuscan countryside.

Ponte d’Arbia and the Via Francigena today

Ponte d’Arbia Sigeric’s Stopover XIV might have been a convenient place to stop in 990 AD. But today there is very little accommodation. Centro Cresti offers pilgrim accommodation. Also, on their website it is interesting to read about their history.

Via Francigena Stage 34 from Siena to Ponte d’Arbia has very few places to stop for refreshments. So the best part about arriving in Ponte d’Arbia is to visit Bar H! Aside from enjoying a well deserved rest, they also have a pilgrim stamp!