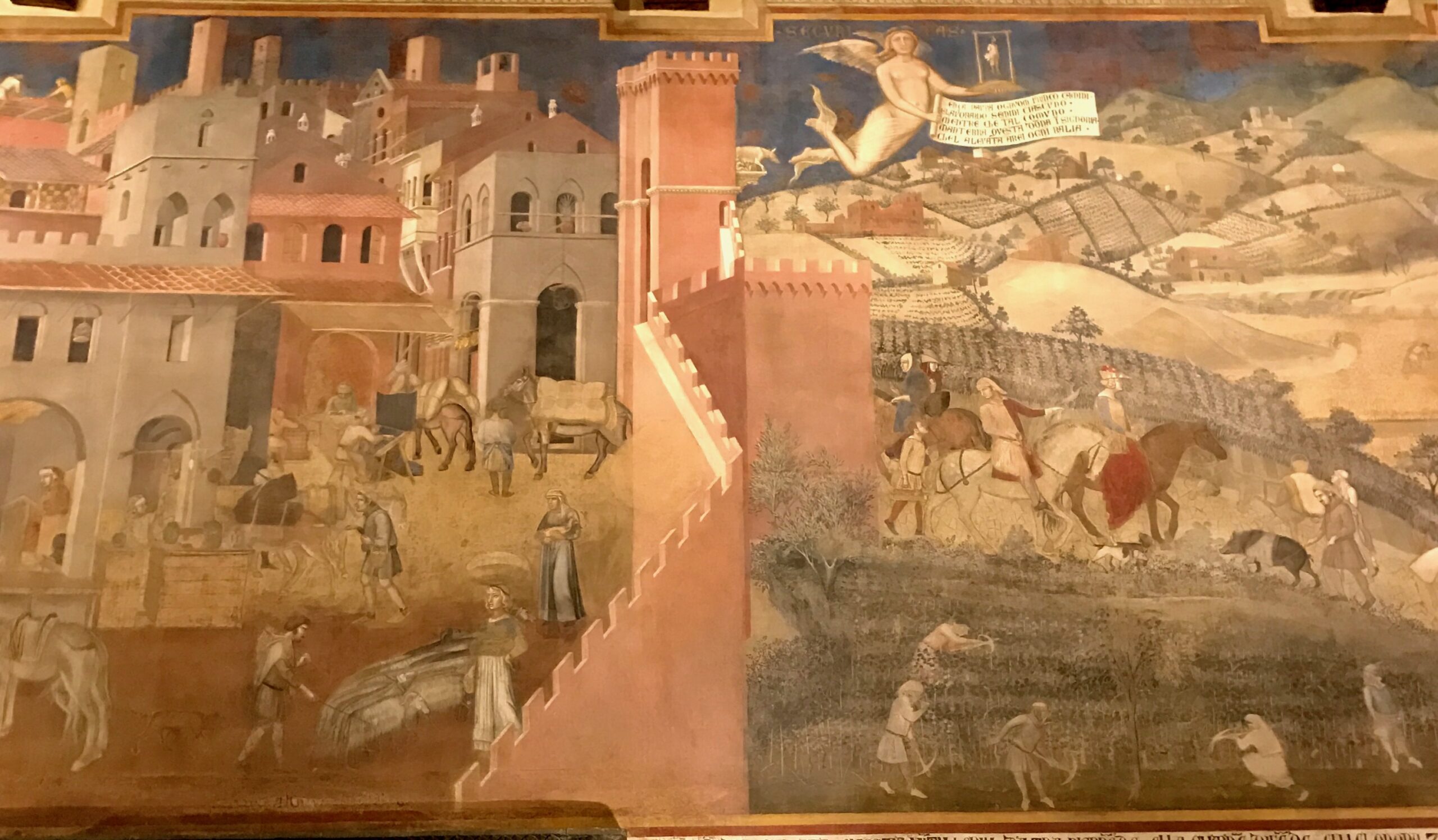 Via Francigena and Siena

The Via Francigena in Siena is not to be missed for many reasons. Firstly, Siena or Seocine (XV) is Sigeric’s 15th place of rest. Today, we can join Sigeric and pilgrims of old and enjoy Siena!

My favourite reason is to see the Allegory of Good and Bad Government fresco by Lorenzetti in the Palazzo Pubblico. Every time I go to Siena I visit the Palazzo Publicco and absorb every detail of the fresco. So why am I so captivated by it? Mostly because we can see how Siena looked in medieval times. Also, it is fascinating to know that the Sienese aimed for ‘good government’ way back in medieval times. Even more so, ‘good government’ is still a big issue in today’s world!

Porta Romana is featured in the fresco. It shows a thriving community with diverse activities inside the city walls. Likewise, the countryside is well-ordered and cultivated. Also, there are pilgrims and travellers happily passing through Porta Romana. Today Via Francigena pilgrims can still be seen leaving Siena through Porta Romana!

History of the Via Francigena and Siena

You will notice many Capitoline She-Wolf sculptures in Siena! Like Rome Siena’s history is steeped in myth and legend. According to legend Rome was founded by the twins Romulus and Remus. The twins were cast into the Tiber by their grandfather’s brother. But they were rescued and fed by a She-Wolf. This myth has lived on and the original sculpture, Etruscan in origin, is in Rome.

But, the legend did not end in Rome. Romulus murdered his father. And after that, he tried to murder Remus’ twin sons, Senio and Aschio. So they stole the Capitoline She-Wolf and fled from Rome. It is said that they fled on black and white horses. Hence the Balzana, symbol of Siena, is black and white.

Needless to say, their Uncle Romulus didn’t let them get away with the theft. He sent the centurians Camulio and Montoria to recover the symbol. However, the centurians remained and became founders of two Siena districts. The twins built a castle on the highest point in Siena. And this became the third district.

Today, Siena has three main districts known as Terzi originating from its legendary history. Camulio founded the Camollia district in northern Siena. Whilst Montoria founded Castelmontori and Valle di Montone in the San Martino district in southern Siena. And the third district in the centre of Siena is where the twins built their castle!

My favourite Terzo is Terzo di Camollia. This is mostly because I have always been fascinated by Saint Catherine of Siena. Today, her presence is strongly felt in this part of Siena. The Basilica of San Domenico has many treasures and works of art. Don’t miss the fresco by Andrea Vanni which is her only portrait painted during her lifetime. Then there is a Relic of her head and other personal objects. There are many other special works of to see, but I like the carvings on the doors to the Basilica!

Then there is the Sanctuary of Santa Caterina which is dedicated to the saint. The gates to the Sanctuary are an inspirational masterpiece offering a warm welcome to her Sanctuary!

Nearby is the famous water source, Fontebranda. It was built in 1183 and the use of water was strictly regulated. First was domestic use, then animal watering, and then clothes washing! It was mentioned by Dante and Boccaccio who attributed it to the ‘bessaggine’ or the madness of the Sienese. Indeed, today it looks very spooky!

Equally fascinating is the Palazzo Tolomei. It was made famous in Dante’s Purgatory when Pia uttered her dying words, ‘Remember me, for I am Pia; Siena created me, while I am destroyed by Maremma’. Then her cruel husband Maremma threw her from one of the beautiful Gothic mullioned windows!

Lastly, there is the massive Rocca dei Salimbeni, home to the wealthy of Siena! It always makes me think of Harry Potter’s Gringotts! Also, the beautiful Piazza Salimbeni is worth a visit.

Terzo di Città is the oldest part of Siena with many famous sites.

The Cathedral or Duomo of Santa Maria Assunta dominates the Piazza del Duomo. It is filled with a treasure trove of masterpieces.

The Museum Complex of Santa Maria Della Scala is opposite the Duomo. ‘Della scala’ means ‘in front of the stairs’. Historically, it was a hospital and place of refuge for pilgrims. In fact, it was one of the oldest hospitals in Europe. Its symbol can be found on buildings and hospitals in surrounding areas. The last photo shows the symbol on the crumbling walls of the Cuna granary. In 1995 the hospital was closed and turned into a Museum. The series of frescoes showing the history of the Hospital is very informative.

Castellare is another interesting place to visit. This where Ascio and Sieno built their Castles on high ground. In medieval times, the noble families clustered their houses around a central courtyard. These fortified homes could easily become an urban fortress.

Terzo di San Martino was important in the days of pilgrimage. So, it is appropriately named after St Martin di Tours, the patron saint of pilgrims and travellers. It was a place of prayer, hospitality and rest for Via Francigena pilgrims. After which they continued along Via Roma and exited Siena through Porta Romana.

The Church of San Martino is located near the Palazzo Piccolomini and Logge del Papa. It is one of the oldest churches in Siena and was mentioned in the 8th century. So Sigeric would have visited St Martin’s church. However, over the years it has been refurbished and embellished to its present glory. Go to the church website to find out more about its history, art and magnificent organ.

Piazza del Campo is without a doubt equally famous with the Siena Duomo! It is shaped like a shell shape with nine segments. These represent the Nine Lords who ruled from 1387 to 1355. They set strict rules about the appearance of the architecture in the Piazza. So today, we enjoy its unique appearance.

La Fonte Gaia sits in pride of place in front of the buildings. In 1419 this fountain was an important water source for the Sienese. Also, it was a symbol of civic pride. It is decorated with reliefs of the Madonna and the virtues who inspire ‘good government’. The Palazzo Pubblico lies opposite the fountain as does the famous drainage system.

On 2nd July and 16th August of each year the Palio horse race takes place. And there is an historical procession before the famous horse race. So if you are walking the via Francigena around this time don’t miss the horse race!

Torre del Mangia has a fascinating history! It was named after the bell ringer Giovanni Duccio. Apparently, he spent all his money on food and was know as ‘the eater’ (Mangia). However, after his death he was replaced by a clock. It is well worth walking up the 400 steps in the tower. The views are amazing! And here you will also find the entrance to the Palazzo Pubblico!

Here is Carol the Pilgrim waiting to enter the Civic Museum to see her favourite fresco The Allegory of Good and Bad Government! The Museum is filled with art works and treasures from Siena’s history. And from the balconies of the Palace there are beautiful views of Siena. Especially the Piazzo del Mercato seen below.

Piazza del Mercato is an interesting place. It is knows as the ‘Tartarugone’ which means ‘large turtle’. And you can see the turtle shaped building in the square. The square was a market place for cattle and other wares. Today, on the third Sunday of each month there is an amazing market filled with local products. In the distance you can see the gardens in Valle di Porta Giustizia! These ancient gardens and distant views are very special!

Then there is Porta Pispini, renowned for its amazing water sprouts. Next we have the Basilica of Santa Maria Dei Servi with its magnificent views over the medieval city. This Basilica has many beautiful art works.

Via Francigena Tours is offering our ‘Taste of Tuscany Tour’ in September 2022. Siena occupies a significant place in this tour. Go to contacts if you wish to join us. We will enjoy the history, art, culture, food and wine of this famous place. In addition, there will be time for sketching and photography with artists as your tutors!

So don’t miss out! Here is sample of our ‘Taste of Tuscany’ special treats! My favourites are the ice cream, the chocolate and the truffles! Not to mention the wine!